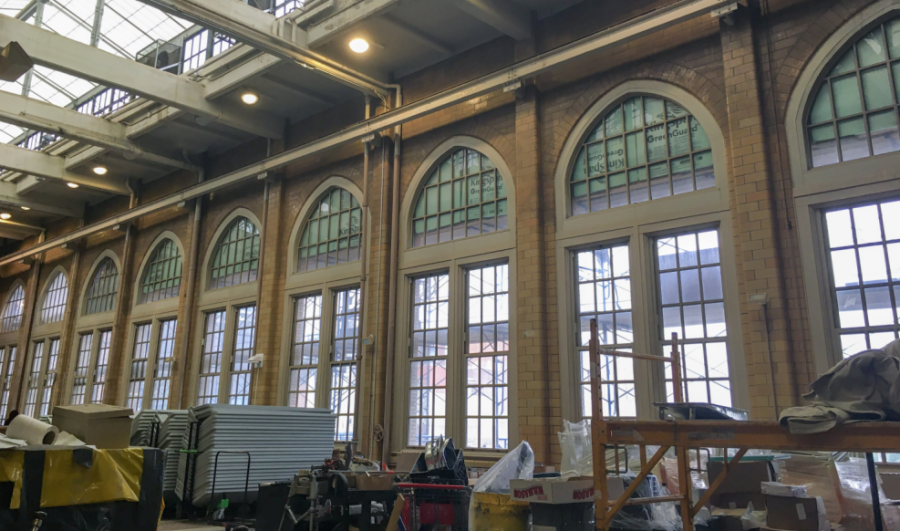 The Alumni Foundation, in collaboration with Principal Newman and architecture firm Perkins Eastman, is working on a proposal—currently tagged at $2 to $3 million—to renovate and reopen the foundry.

“I’m very involved in the plans to repurpose the foundry,” says Mr. Newman. “The idea is to make it a huge media center space, including a student union, where students can just exist, do work, and nap, but also inclusive of a library. And then the idea is to actually close the library. A lot of times, we have meetings or speakers that come to students that we want to bring in the library, right? But then we have to shut down the library. So the idea is to make that a smaller meeting space than the auditorium, which is overkill for a lot of our meetings and whatnot, and then make a bigger ‘library’ up in [the foundry], but inclusive of a student union.”

A student union room has already been put together in room BS12, where computers, navy-blue couches, and tables for pool, ping-pong, and foosball sit dormant. “That’s the kind of idea of something that we want to do with the foundry in a greater space,” Newman imagines.

The Alumni Foundation is also proposing using the foundry for events. A scheme of a ‘lecture layout’ for the media center shows seating for over 500 guests, with a projector placed in front of the windows. Furniture would be moved in and out of the room as needed through the sets of double doors on the 7th floor.

The renovation would entail demolishing and rebuilding numerous walls, installing a new climate control system, refinishing the floors, and purchasing an assortment of new furniture. While the plan is currently unfunded, the Alumni Foundation seeks to raise money for it during the school’s centennial.

Members of the Tech community have differing views on the plan. Brian Onea (‘22) likes the proposal, but thinks the cost is unnecessarily high. “It’s pretty much usable if you just take out all the furniture,” he claims. ”So they should do that, and maybe just remodel it as time goes on.”

Others, such as CTE teacher and former contractor Richard Singler, believe the price tag is justified. “Keep in mind a portion of the cost is applied to planning and building code compliance; this involves several layers of professionals, architects, engineers, contractors. When you start to add all this up with some of the city-specific requirements for a project like this, it will indeed require a substantial budget.”

In addition to the question of funding, the school also needs to consider where to relocate the furniture that is currently stored in the dozen rooms involved in the renovation. Cafeteria workers and school support staff may have to contend with decreased space on the seventh floor.