A Closer Look into the SHSAT 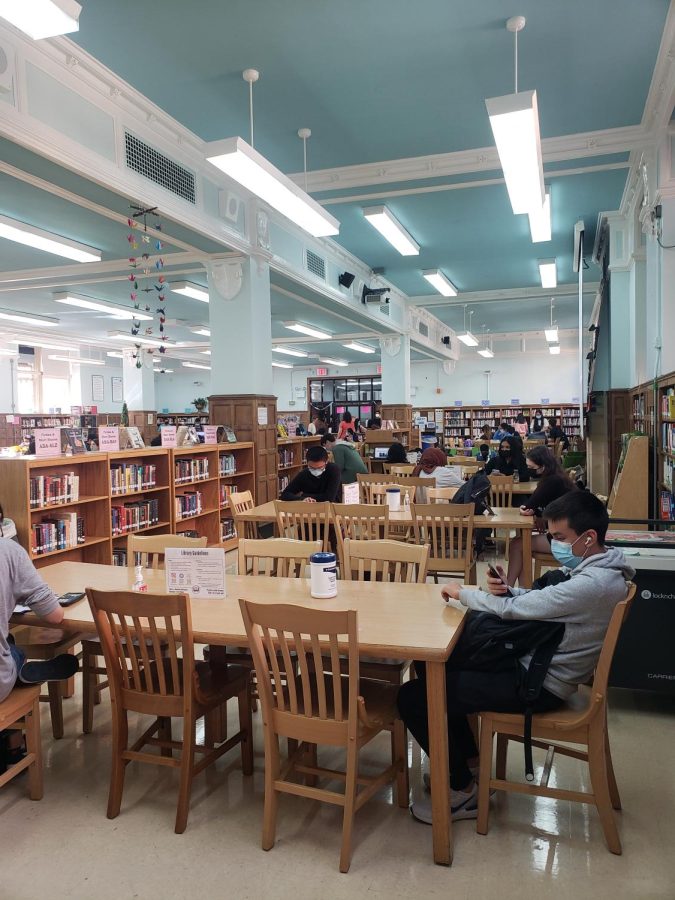 Despite Mayor Bill De Blasio’s plan to eliminate the SHSAT, the exam will be administered in December of 2021. The scene depicts students working in Brooklyn Tech’s William L. Mack Library.

The SHSAT determines New York City students’ admission into one of the city’s nine specialized high schools. Still, many racially underrepresented and economically disadvantaged students do not receive equal opportunities in comparison to their wealthier peers who are able to pay for specialized tutoring. This dynamic raises the question of how the exam will change due to its polarizing effects of favoring higher-income students.

Mayor-elect Eric Adams disagrees with Mayor Bill De Blasio’s 2018 proposition to abolish the SHSAT.  Adams has been vocal about keeping the exam, increasing the number of specialized high schools, as well as the number of available seats to these highly coveted schools. Even as he proposes his plan for the SHSAT, economic inequalities that come with test prep and the underrepresentation of Black and Latino students in specialized high schools may persist.

In recent years, there has been controversy surrounding the exam due to pushback from minority racial and ethnic groups, including but not limited to Black, Hispanic, and/or Latino parents and students. They argue that the exam discriminates against certain races, as illustrated by the dwindling numbers of Black and Latino students accepted into these specialized high schools each year. The number dropped from 11% to 9% for the previous years of 2019 and 2020, despite the fact that  Black students make up 70% of the NYC DOE student population.

Many contend that the SHSAT is biased towards wealthier households that can afford the cost of the preparatory programs designed specifically to aid students in mastering SHSAT questions. Prep programs from companies such as Kaplan, Test Prep SHSAT, ArgoPrep, Caddell, and Study.com range from anywhere between $1 a day and over $1300.

Through a series of interviews with four Tech students in the cafeteria and auditorium mezzanine, it became apparent that many underwent rigorous tutoring for years prior to the examination. The general consensus among students interviewed was that there needs to be some way for all students to receive preparatory material for the SHSAT within school. Biological Sciences major Yangchen Lhamo (‘23), responded that, “Instead of canceling the SHSAT, we should make it more accessible to kids, especially those who go to low budget schools that don’t even inform their students about the test.”

Lhamo touched upon a polarizing press conference that Mayor Bill de Blasio held during the summer of 2018, in which he proposed canceling the SHSAT exam entirely. De Blasio originally made this suggestion in an attempt to equalize the racial and ethnic representation within these elite schools after decades of imbalance. Today, Tech’s own student body is 61% Asian or Native Hawaiian/other Pacific Islander,  23% White students, but only 6 and 7% Black and Hispanic respectively.  Tech is hardly alone among specialized high schools is suffering from a demographic disparity; Stuyvesant infamously admitted only eight Black students in their Freshman class of 2021.

When asked about his solution to increase racial diversity in specialized schools while also catering to the economic limitations of families,  Edward Brook (‘23) stated that, “Students should be able to learn for the SHSAT in school … making it part of the curriculum would help prepare students.”

A similar idea was corroborated by Edib Redzematovic (‘23) who said, “I wouldn’t change anything about the test, but I would disperse knowledge to every [middle] school in NYC because I don’t think enough schools knew about it.”

Looking at educator perspectives in Brooklyn Tech, Mr. Amato, Assistant Principal of the math department, commented that, “I do think that students’ preparedness on the test depends on neighborhoods and schools. Some are put into tutoring programs and have a heavy advantage, and some may not have heard of it and that provides unequal opportunity.” He also adds that there needs to be a “more uniform push to emphasize the availability of this in middle schools and tutoring integrated into the curriculum after school at no cost to students.”

Some currently available budget-friendly prep programs, such as Taicoon and Helicon, are dedicated to offering cheaper alternatives to SHSAT tutoring.

Responding to concerns about racial disparities in elite high schools, Ms. Bonilla, Assistant Principal of English, said, “I’ve watched the city try to create pathways through a broad selection of middle schools including through the Discovery program, but I’m not sure that it ensures representation.” Additionally, Ms. Bonilla acknowledged that students do not have equal opportunities “because students are coming from so many different types of backgrounds and they don’t yield the same resources or educational backgrounds. There is a difference between equality and equity … there are different [academic] entry levels into high schools … there are different levels of preparation.”

When commenting on the SHSAT as the only measure of admission into these high schools and the possible removal of the exam, Ms. Bonilla mentioned that “There are ways to do better, better for all of ninth graders in the NYC DOE, a broader conversation than competition, than a finite number of seats in a finite number of schools… If equity is one of the city’s goals then it needs a nuanced conversation and approach.”

This issue of racial and economic inequality within specialized high schools produces a debate between current and prospective students to these schools, parents, and lawmakers. With the change of power from mayor DeBlasio to Adams, the SHSAT is likely to be a controversial issue concerning economic and racial inequities, and it does not look like the test will be eliminated any time soon.