A Look at the Courtyard: Plans for the Future and a Time Capsule Beneath It 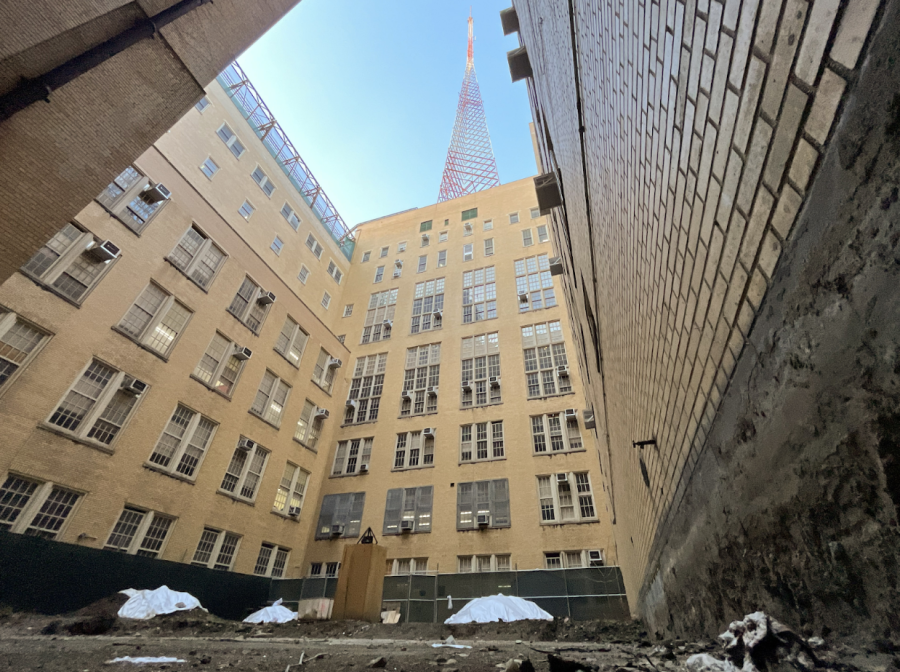 The courtyard in its present state.

The courtyard, one of Brooklyn Tech’s few outdoor spaces, is a source of light and air for the building’s inward-facing rooms. A dirt rectangle covered by tarp and construction fencing, the space is generally ignored nowadays — but there may be more to it than meets the eye.

The plywood box in the middle conceals a tall metal sculpture, designed and built by students in 1972 to commemorate the school’s 50th anniversary. The sculpture has ten panels, one for each of the school’s majors at the time. Brooklyn Tech claims a time capsule was buried under the structure when it was installed.

“There is supposedly a time capsule there,” Principal Newman said. The time capsule would be turning 50 years old this year. There are no current plans to uncover it, but Newman said he would be willing to do so. “Even if it’s not 50 years old, let’s open it,” he said, “I’ll find a hammer, let’s go get it.”

In the early 2000s, the school converted the basement store rooms surrounding the courtyard into classrooms. Teachers found their windows could open wide enough for their students to climb out, which they often did on slow days. The practice died out once those windows were replaced. Afterward, the courtyard only saw sporadic use during school events, and it fell out of use entirely once construction fencing went up two years ago.

The courtyard might as well be a time capsule in and of itself — its broken-down pavers, scattered benches, and mounds of dirt have been neglected for years. The school’s last attempt to revitalize the space was the alumni foundation’s “buy a brick” program, which promised to turn “a weed patch into a beautiful garden.” A brick with the buyer’s name embossed on it cost $95. Those with deeper pockets could also pay $2,500 for a bench, $15,000 for the pathways, or $25,000 for the entryway in the basement.

That plan never materialized. “They were doing some work on the building… [it became] an area to store equipment,” Newman said.

A more extravagant idea is to build a “grand staircase” and sitting area in the courtyard, accessed by a new entrance in the first-floor lobby. Students would be able to use it as a gathering place during free periods. The proposal is from architecture firm Perkins Eastman, which the alumni foundation paid to evaluate underused spaces in the school. The project would be funded either through alumni donations or a city grant.

In its current state, the courtyard is far from useless; it just so happens to be that no one, as of yet, has managed to come up with a good idea and the funding to match. The future of this elusive rectangle is yet to be seen.