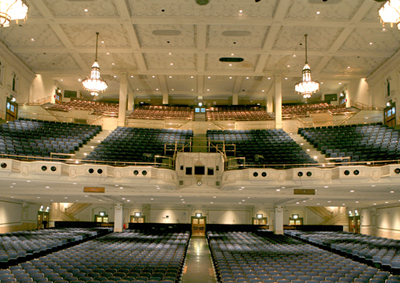 During morning announcements on Wednesday, February 2, students learned that the balcony and mezzanine of Brooklyn Tech’s auditorium were to be closed indefinitely, and only the first floor would be accessible moving forward. No explanation for the closing was provided. Different rumors about the length of the shutdown circulated, but no official timetable was announced.

The 3100-seat auditorium, the fourth largest in New York City, has seen its capacity take a large hit due to the decision. The first floor of the auditorium has approximately 2000 seats, and social distancing rules cut the capacity in half. It is unclear if any students have been denied entry into the auditorium, but students have been forced to sit closer together, a worrying fact with COVID-19 cases at Tech still fairly high when the decision was administered. Principal Newman confessed, “During the busiest lunch periods I look in there, and students are pretty packed in there. I am not going to lie, it makes me nervous.” 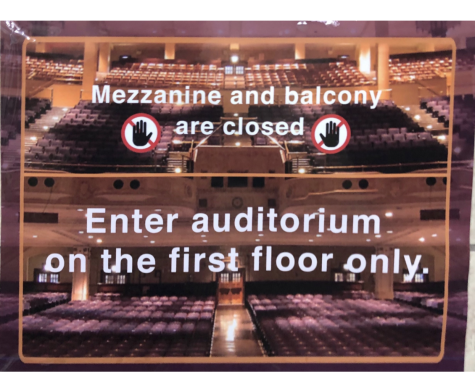 Many assumed the closing of the mezzanine was related to a crackdown on students “cutting” classes. Many students stayed in the mezzanine while cutting classes, so this explanation seemed logical. Dean Angelene Alberga acknowledged that cutting concerns do exist, and they are not solely for academic reasons. She explained, “The main issue with cutting is safety. If we need to find a kid and they are not in the right place, that is a problem. We are not trying to punish kids, we are trying to help them.” Newman added that the ongoing pandemic makes students being in the correct place even more vital. The administration needs to be able to find students who have tested positive or are close contacts with those who have. If they are not in the right place, students could be put at risk.

However, according to Dean Jacqueline Manduley, cutting is not the primary reason for the closing of the mezzanine. Only two deans can be assigned to watch the auditorium per period, and deans have found it extremely difficult to control students in the mezzanine. The area is barely visible for a dean attempting to view it from the ground floor, leaving just one dean to patrol the aisles. Manduley recalled social distancing rules not being followed and students acting unsafely — students were climbing over seats and leaning over the balcony. Manduley said, “I was looking up there every day praying that a student would not get hurt.”

Safety-related incidents culminated in a freshman hanging off of the balcony shortly before the closing. While not the sole reason for the decision, it confirmed for the administration that changes needed to be made. Newman says it was “the final straw,” and multiple sources confirmed the closing is likely to last through the end of the school year.

The mezzanine closing marked only the first step in a series of safety-related changes. Hallway-clearing measures were next, and became progressively more extreme. Students are now being told to leave the hallways whether they have a free period or not. Deans have been seen going from floor to floor, receiving word of students in different places through their radios, and telling them to go “where they are supposed to be.”

Student programs have been adjusted to assign 50% of students to the auditorium during their lunch period and 50% of students to the cafeteria. Newman said up to 1200 students can be assigned to a particular lunch period. “600 up, 600 down.” Multiple sources within the administration report that the Office of Health and Safety is working on technology that would prevent students from going to the place they are not assigned to. The machine used to check IDs would make a sound similar to the one made when students attempt to enter the cafeteria while skipping a class.

With the mezzanine closed and the library having an extremely limited capacity, the first floor of the auditorium seems to be the only option for students besides the cafeteria. Lurking in the staircases remains an option, while not one endorsed by the administration. With the cafeteria and auditorium isolated at the lowest and highest parts of the building, spending free periods in those places can be logistically challenging for students. Newman said he sees this as a matter of convenience. “I get that it’s easier to stay on the floor your class is on, and we have been very flexible with hallways in the past. But we are in trying times, and safety has to take precedence.”

With Newman posing rising Covid-19 cases as a potential rationale behind these changes, the timing is questionable. Changes were not implemented until several weeks after cases began to rise, and were made with cases on the decline. Newman confirmed that Covid-19 concerns did in fact play a part. He said, “There were floods of students in the hallways after I closed the mezzanine. They had masks off, and they were taking the opportunity to eat. Teachers could not even get through the hallways with equipment, there were so many people.”

When confronted with the fact that similar practices occur every day in the cafeteria, Newman agreed but maintained that it is easier to monitor. “In the cafeteria, you have people with megaphones who can yell at students breaking rules. Even in the auditorium, the deans have a microphone to use. Having deans pacing the hallways and telling students to put their masks on is just not practical.” As for the timing of his decision, Newman admits it was imperfect. “You have to react to things that happen, and the timing on these decisions is not always going to be perfect.”

It is also notable that no rationale has been provided publicly. On February 8, several days after the policy began being implemented, the following message was included in Daily Announcements from Coordinator of Student Activities Christina Massie: “[to] ensure a safer, healthier school environment, all students must report to their assigned locations, as indicated on their official schedule. All students have been assigned to the cafeteria or to the auditorium during their free periods. This means that students are no longer permitted to be in the hallways or in the stairwells during their free periods. All school leadership and staff will be supporting this safety protocol in the days ahead.”

The announcement, buried under several other messages in an email that few students read to begin with, is the only message that has been put out. While it is difficult to argue against a “safer, healthier school environment”, the message does not explain how the changes will do so.
The note is labeled as “A Message From the Office of Health and Safety.” The newly minted Assistant Principal of Health and Safety, Lisa Iacono, was reached for further comment but provided no response.

Newman confirmed that he ceded communication on the issue to the Office of Health and Safety, and admitted that it could have been handled better. However, he encouraged students to try to read Daily Announcements. He said, “Just because an email doesn’t say my name on it doesn’t mean you should ignore it”.

The location of the message is an issue, but the content of it is arguably a bigger one. There is no reason information provided to The Survey could not have been included in a message to students. Newman agreed with this idea, but said he did not believe it to be necessary initially. He reflected, “I guess I underestimated the backlash these decisions would receive.”

While the changes will likely remain in place through June, discussions are beginning to be had about the best way to approach next year. While New York City Mayor Eric Adams’ decision to remove the city mask mandate shows the direction the city is going in, Newman said he is committed to remaining cautious. “I was the only principal not to allow students to eat and drink in class. That was not a DOE thing, it was not a Brooklyn thing, it was a me thing. I made a commitment to keep my teachers safe and the students safe, so I am going to make sure I feel extremely confident before potentially putting them at risk.”