What’s the Hype With the Hypebeast Meme?

Four teenage boys, clad in all Supreme clothing, posing in a checkered red-and-black hall that strangely resembles the halls of Brooklyn Tech. It is a classic image that never fails to fall off the the internet, making appearances on Brooklyn Tech-based meme accounts, as well as outside of the Tech bubble. Strangers on Twitter have gotten hit tweets using the meme. User @YEESSSIIIRRR, for example, applied the meme to a pop cultural reference in a tweet and garnered 20.4 thousand likes.

What is it about this very ordinary photo that makes it so “meme-worthy”?

Thomas Chen (‘17), a recent graduate of Villanova University, and one of the four subjects of the meme, had the same question.

“I honestly have no idea why it blew up as much as it did,” He admitted.“I had worn my black hoodie that day and happened to run into my lacrosse buddies in the hallway who were also wearing the same hoodie. They asked me to take a picture with them.” After that, the picture went viral. “One of my lacrosse friends posted it on a Facebook page that had thousands of members, called ‘What Did You Wear Today’. Upon posting, the picture garnered around a thousand likes in under an hour.”

“I believe that it was partially because we look like privileged and spoiled kids who ‘used our parents’ money for clout,’” Chen theorized.

This brings us to the name of the meme. What is a hypebeast? A hypebeast is a passionate participant of the fashion and consumer culture: someone who is constantly collecting the latest trends of brands. “Supreme was an expensive brand that was very big during my high school days and so evidently, a lot of people wanted to be seen sporting the box logo on their clothing,“ Chen explained.

Tech-based meme platform @BTHSaffirmations on Instagram is easily becoming influential to Tech culture, posting relatable, humorous posts that are reposted story-after-story by students. One particular post has the Hypebeast meme as the background with the text: “The first week of school is a fashion contest and I am prepared to win.” It was posted during the first week of the 2021-22 school year when all students would be returning to Tech after missing out on the previous year’s first day of school. Many students were excited to showcase their evolved fashion tastes. As the post spread through the Brooklyn Tech social network via Instagram, the Hypebeast meme rose to surface once again. 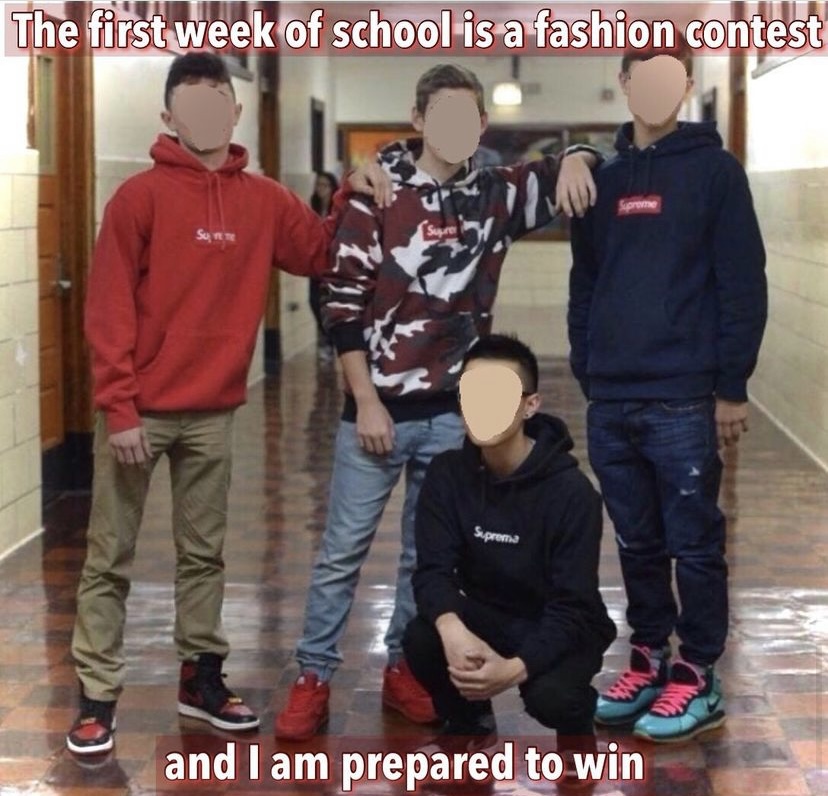 Though Chen is baffled by the meme’s constant re-emergence, the creator of BTHS affirmation provided insight on the meme’s relevance to today’s teen culture. Though nearly 6 years have passed since the photo was taken in 2016, some fashion elements have remained within Tech’s culture. “I think the meme is so popular because streetwear is such a prevalent part of the school’s culture. Hypebeasts are a common demographic here, and it’s something that you’ll see in your classes. Sometimes the style can be very over-the-top as you can see in the meme. There’s a comedy that exists within exaggerated conformity where participants are naive of how they appear.”

By using the Hypebeast meme as a background on the post, BTHS Affirmations was aiming to create a comical effect by subtly suggesting that the Supreme outfits were “peak fashion.” At the same time, they found that using the meme would get their point more readily across. “It can appeal to the real feeling within many Tech students during the first week of school; they want to impress their peers and have cool vibes.” Likewise, what does Hypebeast culture entail? Impressing peers through trendy over-the-top fashion?

Though it is much rarer to see students sport full-on Supreme nowadays, that doesn’t mean Hypebeast culture at Tech is not thriving. Hypebeast culture is not only concerned with collecting Supreme items, but trendy brands like Nike, Adidas, and Anti Social Social Club, popular amongst Tech’s student body.

Though many students are aware of the meme, Principal Newman was not. Upon hearing the average cost of Supreme items in a recent interview, he corroborated, “So many kids probably wear it so they can show off that they can afford cool clothes.”

“We interpret pictures based on our experiences,” he continued, implying that the meme grew so viral because teens saw relatability in the picture.

The Hypebeast meme is not the first time Tech has gone viral. Principal Newman addressed his misgivings for Tech’s viral moments: “Memes capture only glimpses that are not good at characterizing the school. For example, let’s say someone took a picture of students walking through two feet of snow to get to a school that is located in a place that really gets snow once every decade. The picture spreads and outsiders have this perception that students of this school have to go through all this snow often.” Similarly, Tech has previously gone viral for the state of its bathroom. “If someone saw that picture of the bathroom in disarray, they would think that vandalism has taken place and that it is a constant issue at the school,” Mr. Newman explained.

Chen also addressed the locked perception the meme placed on the four subjects of the photo. “The photo isn’t an accurate depiction of any of us,” He began. “It depicts us as privileged and spoiled even though we worked very hard in high school to get where we are now.”

While the meme’s relevance has stayed constant, Chen’s life has not. Chen has come a long way from being part of a viral meme and is now preparing for the upcoming medical school cycle. Though a lot has changed for him since the meme, he explains, “I never wore Supreme after high school.” He still finds it amusing that even his Villanova friends have come across the photo. “I don’t particularly feel any different knowing that I am part of an infamous meme tied to Tech. If anything, each time I see the photo it brings back a flood of both good and bad memories knowing that part of my life is forever etched on the internet.”

As Chen goes on to pursue greater endeavors beyond Brooklyn Tech, one thing is certain: his imprint on the school’s culture will not be fading anytime soon.