If You See This Bug, Kill It, Then Study It! 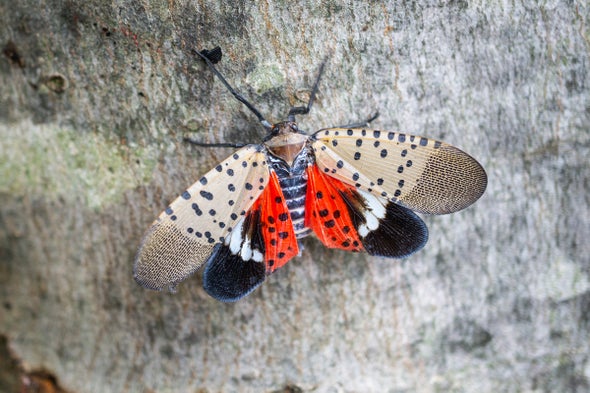 A picture of the spotted lantern fly mentioned in the article. Courtesy of scientificamerican.com

Spotted first on Staten Island in 2020, a special species of spotted lanternfly is now present in all five boroughs of New York City. Although this insect is believed to have no harm on humans, it has a severe effect on plants: particularly trees-of-heaven, grapevines, and apple trees.

The New York State Department of Agriculture and Markets has asked residents to help report the sightings of these pests, their nests, eggs, and secretions. While lanternflies are a harmful, destructive species, Brooklyn Tech students can still use this invasion as a research opportunity, while always remembering, most importantly, to kill them first before investigating them.
As an invasive species, this type of spotted lanternfly was first found in Pennsylvania in 2014, according to NYUpstate, a newsletter focused on updates specifically for the State of New York. NYup assumes it to be very likely that the first lanternfly was transported to New York State by an interstate shipment.

In an interview, Dr. Margarita from the Environmental Science department at Tech explained how hard it is to control this species: “Where spotted lanterns are native, in Southeast Asia, there are predators to keep them in check. Here in the U.S. there is no natural predator and with plenty of plant species for the spotted lantern to feed on, the population surge is a problem,” she said.

Brian C. Eshenaur, a professor from the College of Agricultural and Life Sciences of Cornell University who is involved in the NYS Integrated Pest Management Program, explained that “right now they are beginning to lay their egg masses. Those eggs will hatch next May. We anticipate even higher numbers of spotted lanternflies in the City in 2022.”

The spotted lanternfly can jump and fly short distances but spreads mainly by hitching onto vehicles, luggage, outdoor furniture, and firewood. “It is hard to eliminate a species once it has established itself. There may have to be multiple strategies used such as physical, chemical, and biological, but I hope that science will offer innovative solutions,” Dr. Margarita added.

Although the government has fought to mitigate the destruction caused by these insects, the Spotted Lanternfly’s impact on crops that are critical to New York’s agricultural economy — such as the grape and apple industries — is still heavy. “Even though we don’t have estimates of the losses to our wine and grape industries, it could be significant since the feeding by Spotted Lanternflies can kill the grapevines,” Professor Eshenaur said. From data he provided about the severe situation in Pennsylvania, it will cause a loss of at least $324 million and 1665 jobs.

Dr. Margarita further elaborated. “Training and enlisting the public raises awareness and may help slow the spread of these insects which can damage grape crops and apple trees,” she said.

As Brooklyn Tech students, we can use the lanternfly invasion as a great opportunity for research. Dr. Margarita urged students to use the invasion for scientific purposes. “Interesting areas of research might be biological control of the pest, such as fungi treatment. I would recommend reading four or 5 secondary lay articles on the topic and highlight all references and bibliography of each article. Then I would dive deeper into the primary research articles cited and start to write my own questions down as I read each article. Don’t judge your questions; let the questions keep flowing. Then go back over the questions and look at ones that could be investigated through an experimental design,” she said.

Sheena Chen (‘22), a chemical engineering major at Brooklyn Tech, talked about her interest in lanternflies. “Yes, I have heard about this insect. I searched on the news later on. Of course, we should kill it as soon as possible if we see it,” she said. Chen then expanded on the promise of research, explaining, “If I really have the chance to do something myself, maybe in college or sometime later, I would be more specific in researching what needs to be done in order to keep the environment safe, how it would affect everyday life and society, as well as the most important thing, how would it change what we are used to if it continues.”

This invasion of spotted lanternflies is an opportunity for high school students to witness an ecological and biological change in the modern world. This fact not only demonstrates to us that the Earth is changing every moment but also shows the possible effects human activities can have on the environment. It opens a broader horizon for us to understand more about the relationship between humans and nature, as well as to incorporate what we learn in class into real-world situations. Tech is a STEM-oriented school, and as possible future engineers, scientists, and conservationists, we can put our passion for science towards contributing to our community and learning from experience simultaneously.