While many see Brooklyn Tech as a specialized STEM school, the Junior State of America (JSA)  is just one of many organizations that brings politics to the student body.

Arriving at Tech two years ago, the JSA has grown as a community of politically aware students that, in the words of Chapter President Elizaveta Mishina ’14, “provides Tech kids an opportunity to get out of the test-crazed, zombie environment they live in by teaching them to stand their ground, voice their opinions with accurate critical thinking skills, and face challenges they never thought they would face.”

Mishina  currently heads Tech’s chapter of the JSA.  She hopes that every student will take advantage JSA’s opportunities, which she states “can benefit everyone”. Mishina says that because of her experience with the JSA, she has not only become more politically aware but also has gotten the chance to attend conventions in New York and Connecticut, speak in front of hundreds of people, and attain a scholarship for a JSA summer program in Stanford, California.

The senior also expressed that JSA helped in preparing for her upcoming departure to college, as well in learning how to speak publicly, network, create a community, and organize and plan strategies.

Club advisor and social studies teacher, Francis Mayle, has also benefited from the club’s offerings. Since last year when he was asked to be the advisor, Mayle agreed to not only help students out but also to fulfill his own curiosity.  Although he states the club is mostly student-run, Mayle  occasionally participates, interjecting with additional insight and information. 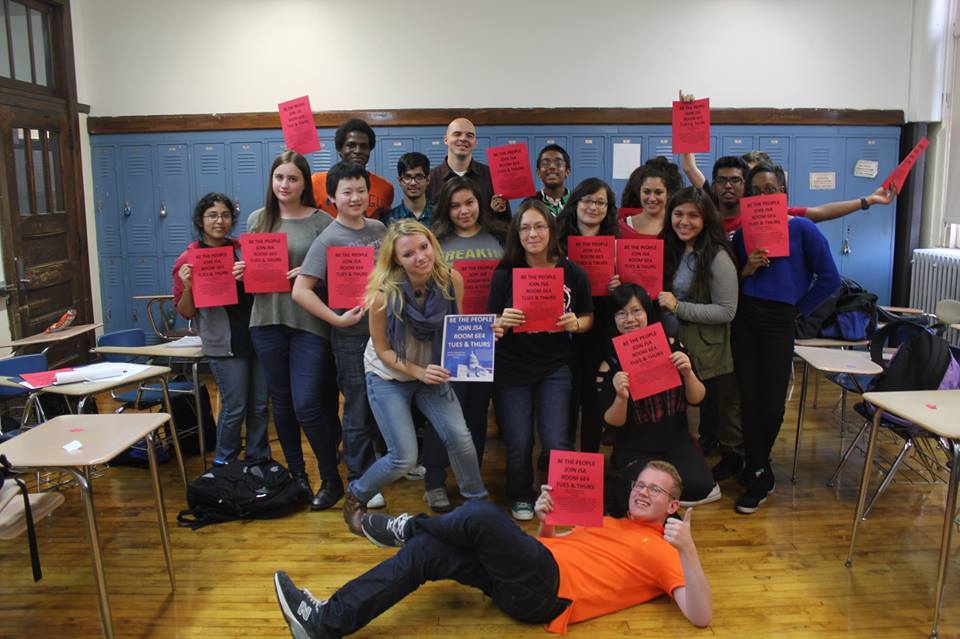 Unlike other politically oriented Tech organizations, the JSA, in Mayle’s view, is “neutral”.  It  allows all viewpoints, liberal, conservative, or otherwise, to be heard. Mayle has stated that through the JSA, he hopes “for students to become informed, go to events, form accurate opinions and be able to back them up.”

Alongside Mishina is Maggie Zhang ’15, the Chapter Advocate. “I don’t know, it’s like I was meant to be in this club. At first, though, I wasn’t very sure I would like the club, but I gave it a try anyways and I am very glad I did,” she says about her first experience in the JSA.  Zhang has found that the organization has helped her become more politically aware and has improved her public speaking skills. “Even though I am still pretty shy, I have come a long way, and it is all thanks to JSA.”

Aside from the in-class debates facilitated by students and a gavel, Tech’s chapter of the JSA travels to events and overnight conventions.  Harry Rothstein ’16 organizes transportation and lodging, while also communicating with other businesses and organizations to sponsor the chapter.

Rothstein was surprised that many students were just as passionately interested in politics as he was.  Through JSA, he gained a leadership position to expand the community in Tech, as well as in other parts of the country.

“It was truly a community of teens interested in politics. I expanded my group of friends to include sophomores, juniors, and even seniors. These were people who gave me important advice which I was able to use to make my high school experience more enriching and successful… once you arein it you are hooked. JSA is something that lasts all of high school, not just one year. Your JSA career can and will develop as time goes on.”

1 thought on “JSA Making a More Than Junior Statement”

Advertise in The Survey!